Our trip to Nashville, Tennessee would not have been complete without a visit with the guys from Dads Drinking Bourbon. Now if you do not know who these two are and you are into bourbon podcasts, then you are missing out. They are one of the top rated if not the #1 bourbon podcast today. They were recognized by The People’s Choice 15TH Annual Podcast Awards as the best podcast in Arts.

This duo is made up of Big John Edwards and Zeke Baker. They clam to not get out much, but still like to get together once a week, drink whiskey, and record it to share with all of you. They believe bourbon is about the stories and experiences they share while drinking together. One of their main beliefs is that some of the best bourbon brands are based on good stories!

These are two dads from Nashville that trade their kids’ bottles for whiskey bottles after bedtime. They focus on blind tastings, side-by-sides, as well as interviews with the people behind the whiskey to determine the true review without bias on brand names and hype with a goal to make you #rethinkhowyoudrink.

Just like The Bourbon Road crew, John and Zeke do not always have the same opinions when it comes to whiskey. What one person loves, another person may just think is okay. They hope that the fact that they don’t always see eye-to-eye on the same drams is a welcome perspective! 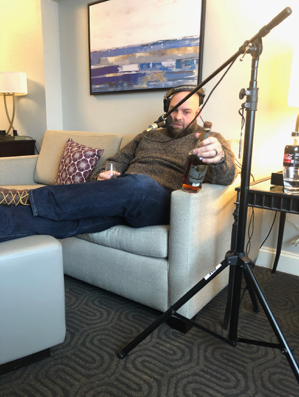 Now being dads, Zeke had family duties and could not make it to the recording, or at least that’s what John told us about his Unicorn Co-Host. I don’t know if John can recreate a good southern accent so we do think Zeke is possibly real. We did however get to sit down with Big John and what a blast we had. The three of us recorded an episode for each podcast and sampled an overabundance of great Bourbons along the way.

John and I had talked weeks earlier and we seemed to hit it off like two old friends. This seems like the case often times in Bourbon Culture. The appreciation for a good pour and conversation about the dram is often all it takes to strike up a great friendship. John is one of those personalities that can easily take over any conversation and it is easy to get lost in a conversation with him. Time just seems to fly bye.

This was the case with our interviews together. Time flew bye and we had two great shows that we hope you will enjoy. John is a graduate of the University of Kentucky by way of Massachusetts and he claims to have fallen in love with the amber nectar while in college. We can say this, if he did not get a great education at Kentucky, he sure came away with one hell of an education in the bourbon Culture.

You know what time it is right. Grab that favorite whiskey glass and pour yourself some bourbon. Sit back and listen as Big John Edwards from Dads Drinking Bourbon takes a trip down The Bourbon Road with many laughs along the way.