For our first pour I thought I would challenge Jim to a blind pour. Challenging Jim is a giant task and while he will always state he is no bourbon expert, he does have an exquisite whiskey palate. Now don’t go telling him I said that as I will never live it down. So I felt like I had a good game plan. A week earlier we had discussed Flatboat Bourbon Whiskey and he said he didn’t like it. That comment from him kind of struck me as odd. You see Jim is a Rye Bourbon guy as you well know and he is also a big fan of Barton 1792.

What does Flatboat and Barton have in common you ask? Flatboat is a collaboration between Barton 1792 Distillery and Liquor Barn that has been aged at least 4 years. With that I wanted to see if Jim could tell the difference between the two brands so I looked for a Barton bottle that matched the color of Flatboat perfectly. I decided on Barton 1792 Single Barrel. That was a mistake on my part. I should have went for a bottle of Very Old Barton which was about the same age difference instead of picking the older aged single barrel. Yes Jim noticed right away but I believe that it reminded him that almost every whiskey has a use, whether it was cooking, making cocktails, sharing with great friends or just sipping by a fire.

A little history about flatboats before we move on to the second pour. The flatboat trade first began in 1781, with Pennsylvania farmer Jacob Yoder building the first flatboat at Old Redstone Fort on the Monongahela River. A flatboat itself was a serious investment for a Midwestern farmer. One generally cost about $75 to construct in 1800 (which was equivalent to $1,129.85 in 2019), but could carry up to $3,000 worth of goods.

The boats themselves were usually salvaged for lumber at New Orleans. The salvaged boards were used to build barge board creole houses. Some of those houses still exist today and one was recently restored in the French Quarter. Abraham Lincoln even served as a flatboat man twice, in 1828 and 1831. His First voyage was made when he was just 19 years old. These trips would shape his personal views of the south.

Four our second pour Jim decided we needed some warming up being that Kentucky was being hit with an arctic blast and temperatures would dip into the 20s overnight. To complete his task he brought a bag of High West Whiskey to give us that Kentucky Hug we were looking for. Now if you don’t know High West, they were founded in 2006 in Park City, Utah after David Perkins visited Markers Mark Distillery in 2001, where he had a whiskey vision to start his own distillery. They
were the first legal distillery in Utah since 1870 and have built quite the reputation. In 1933 Utah provided the 36th vote to end prohibition “No other state shall take away this glory from Utah.”

Today High West makes whiskeys like BOURYE, High West Double Rye and A Midwinter Nights Dram. Each one of these whiskeys present a different flavor profile with A Midwinter Nights Dram being our favorite. It is dark, rich and full of complex layers that one can get lost in while sipping. We both agree this is a must on anyone’s shelf if it’s in your price range. We definitely wouldn’t walk past a bottle of it. I have to admit that unlike my failing effort to stump Jim, he was successful and up to the challenge with warming us up with the lineup from High West. Congrats Jim.

So it’s that time again where you grab a glass, pour a high rye bourbon and listen as Jim and I take you on a trip down The Bourbon Road sipping on five rye bourbons. Cheers. 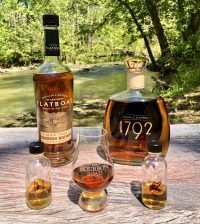 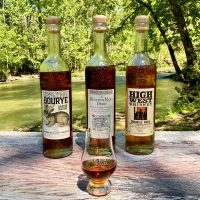