One of the most appealing and exciting things about the bourbon culture is the sharing. The generosity from the bourbon curious to the bourbon experts is truly amazing and time and time again Jim and I have experienced this first hand. With all that being said we are still in shock at the bourbon we receive from listens, family, friends and even distilleries.

One such occasion was with the release of Heaven Hill Bottled in Bond 7 year. With it not being released in Kentucky or neighboring states Jim and I were very disappointed. We had so wanted to compare this new expression to the old. In 2018 Heave Hill announced it would discontinue the old expression setting off a frenzy to buy up as much of the old stock as possible.

Jim was a lucky one and bought two cases to ensure that he would have ample bottles for years to come. I however only have one bottle that someone left at my house after one of our epic fires. I have allocated pours from that bottle over the past three years to ensure its enjoyment last, but the bourbon culture is always there to surprise you and Jim has stated on several occasions that I need not worry because he has a bottle for me. Heck he even gave away one of his bottles in our first giveaway.

In 2019 Heaven Hill surprised everyone with the release of a new Heaven Hill bottled in bond 7 year. It was expected that they would do this, but the big surprise was the price. They tripled the price of it by adding just one year. The bourbon community was furious that they did not release in Bourbons Home state but they now they were going to go from a $15 bottle to a $45 bottle.

Now I understand that nothing stays the same forever. If that was the case an entire bottle of whiskey would still cost around $1.40 which was the price just after prohibition was repealed in 1934. By 1946 it had rising to $4.25 for a bottle of Four Roses. So you can see that with time everything will eventually rise with inflation. Maybe Heaven Hill realized they had missed out over the years. It does take lots of added money for all the improvements they are doing.

With all that it looked like we would never be able to get our hands on a bottle of the new juice, that is until one of our listeners and moderators of our Facebook group Adam Boothby brought us two bottles as a gift. Once again the bourbon culture, the thing we cherish so much had ensured we would not miss out. Adam lives in Chattanooga, TN and is very active in the bourbon community. He loves bourbon so much that he proposed to his fiancé in a rick house at Wilderness Trail Distillery.

When we received the bottles, Jim and I discussed what other podcast/social media platforms had done to talk about the difference in the two bourbons, but we are not like every other podcast. We are just two old #bourbonbullshitters that try to call it like it is. An episode to compare both and discuss what was going on in the whiskey world was a much needed distraction from the real world for both of us.

We gotta say once again thank you to Adam Boothby for the bottles of bourbon and everything he does for the podcast. If you have a bottle of either the 6 or the 7 year, grab it and pour yourself a glass. Sit down and get comfortable as Jim (Billy Goat) and Big Chief take a trip down The Bourbon Road courtesy of a fine Tennessee Gentleman. 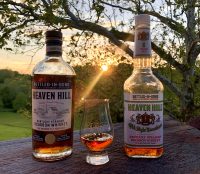