The Bourbon Boys get together to participate in a double blind tasting and “shoot the breeze’ about horse racing, new shows, new distilleries and products.

What happens when you get a group of guys together (who don’t really know each other that well) and decide to do a double blind tasting? A friendship over bourbon ensues with some great conversation and a new infinity blend! Jim and Randy of the “Bourbon Road”, Jason from “Mash and Drum” Scott from “My Bourbon Journey” and “Dusty” Dan of “Dusty Dan’s Whiskey Reviews” got together in Simpsonville, Ky to participate in some conversation and a double blind tasting. That’s right…  no one knew what was brought or who brought what!

They say that a blind tasting is the equalizer for bourbon drinkers but you will find in this episode that these guys have some developed palates. Each one brought a bottle in a bag so that the only ones who knew what was brought and who brought what were Melody, Jim’s wife and Julie, Randy’s wife. The ladies poured up the spirits and labeled them A-E and the fun began! Dusty Dan won the event (Jim and Randy were hosting so were eliminated by default) which came with a prize of a serving tray from Bourbon Barrel Rehab. However, everyone agreed, the real winner that evening was the new infinity blend (leftovers poured in a bottle). The blend was called appropriately “Road Map” since the group represented the states of Ohio, Maryland, Wisconsin, and of course Kentucky.

When the Bourbon Boys get together… it’s on! 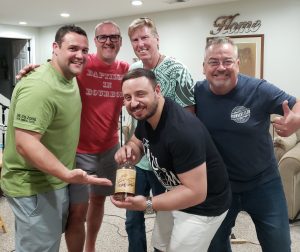 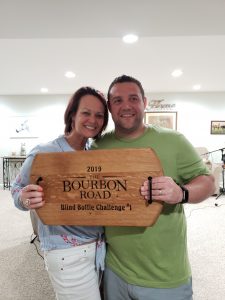 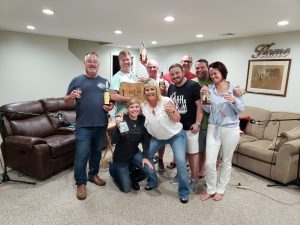