This week Jim and I had a chance to talk to Traverse City Whiskey Company owner and founder Chris Fredrickson. This got me to thinking of the history that the great lakes of North American have played in the whiskey culture. During prohibition the mob used the great lakes to their advantage with running whiskey from Canada. Cities like Detroit, Chicago, Cleveland and yes even Traverse City were hangouts for notorious gangsters like Al Capone and John Dillinger.

Michigan itself was one state that actually fought prohibition right up to the bitter end where the states attorney told northern Michigan bootleggers to fire on law enforcement if they tried to seize their booze that they had made. The weird thing is that Michigan had enacted a state Prohibition amendment in May 1917. The truth about Traverse City Police Department paid most of their attention to out-of-town bootleggers or moonshiners who peddled poison. Kind of sounds like modern day ATF agents who just don’t want people dying bad moonshine right?

Around Little Traverse Bay, posh resorts offering booze and gambling appear to have catered to the wealthiest visitors and notorious gamblers, but these establishments operated invisibly to local police. One such place is Sleder’s Family Tavern who’s owner kept  barrels of special “root beer” (bourbon and rye), which he served in tea cups and for free, of course, to law enforcement officials. No surprise that this is one of the reasons it is Michigan’s oldest, continuously-operated restaurant since 1882.

In 1930 a crackdown came to Traverse City when Michigan State Police decided to do what local police wouldn’t. That August, troopers arrested Detroit bootlegger Joseph “Frenchy” LeBlanc after a 25- mile chase that ended when police shot at his car in the woods near Lake Ann. The newspaper called LeBlanc one of the most prominent bootleggers ever busted in the area. Michigan State police also focused their sights on one of the town’s best-known taverns, Sleder’s.

Sleder had a clean record, but police hauled a truckload of booze and a still from above the Randolph Street establishment. The prosecutor authorized the raid and surprise the local police were unaware.

The prosecutor explained that he telephoned Sheriff Fred Johnson as soon as the search warrants were ready, but the sheriff was out and, not wishing to delay raids, he called the state police. Police found 6 quarts of moonshine, 231 pints of beer, 50 gallons of mash and two stills.

In the end, Sleder was charged with possession, not bootlegging, and he was given leniency by the judge, who fined him $600. Sleder, the judge told him, “this is your first offense and you’re charged with possession. As near as I can understand, you have always borne a good reputation, and though a still and some mash were found, I won’t send you away.” Was the judge a patron of Sleder’s?

Today you can still grab some great food and of course some legal whiskey these days at Sleder’s. Stop in and grab a pour of Traverse City Whiskey Company’s American Cherry Whiskey. We will guarantee that you will love it. Some local food to try is Smelt (A small fish) or lake perch from the waters of Lake Michigan. Cheers

So with that grab a glass, a bottle of whiskey, so you can listen in comfort as Jim and I travel up The Bourbon Road to the North Coast to check out Traverse City Whiskey Co with Chris Frederickson. 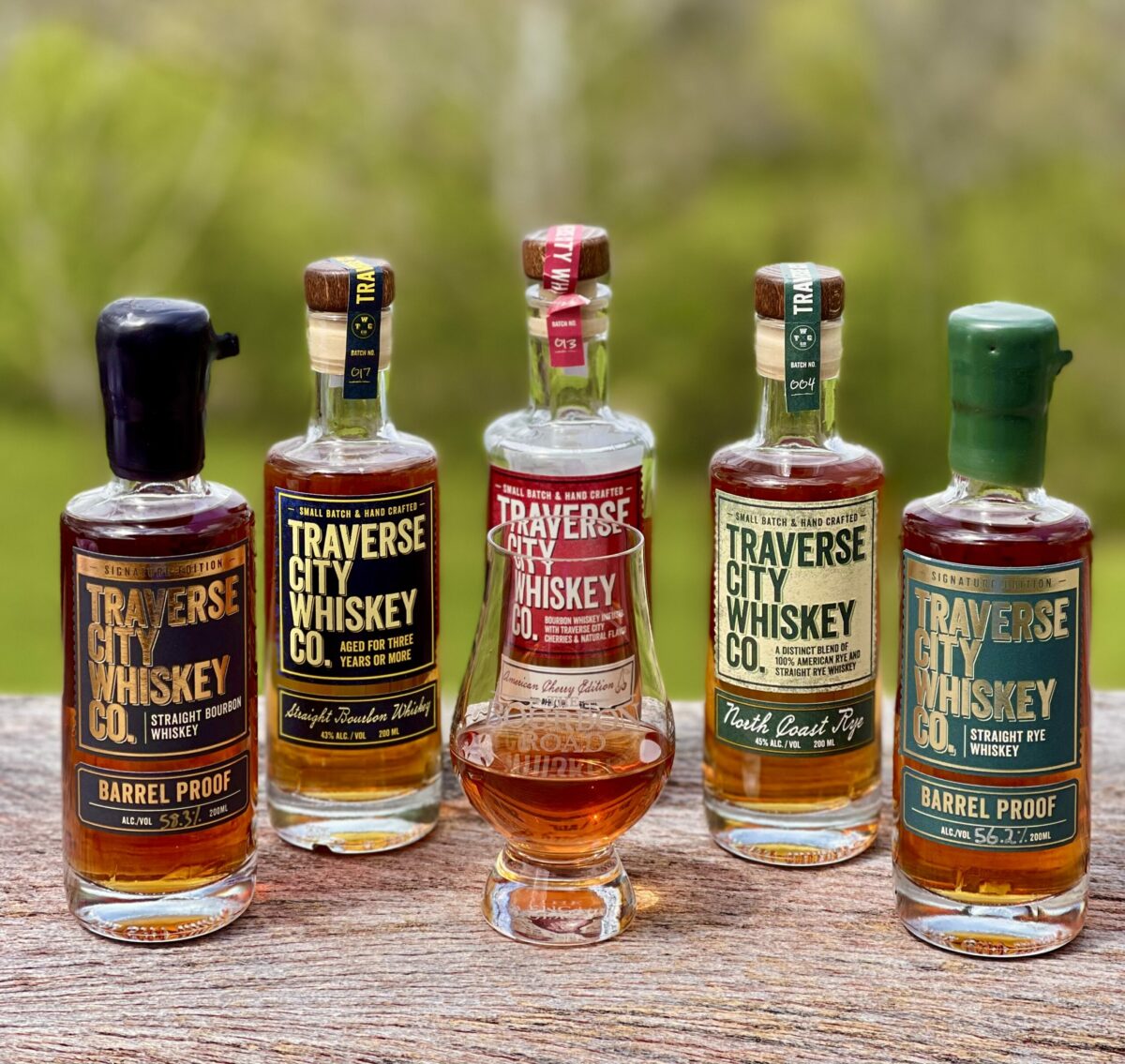